There are times where you feel anxious, or butterflies prior to an event that you’re participating in that will make your preparation for such an event either fruitful or regrettable. I’m happy to state that my butterflies were there, but not so much as a nervousness due me questioning whether or not I have trained properly, and am I wearing the right equipment for this event.

The morning started at Chicago’s Union Station for our ride to the start line which was at Henry Kalk Park, Glenco, IL. Just getting off the train and the registration/ check in tables are 100 yds away. Well, one good thing deserves another right? Well, the morning of the event it had been forecasted to be gloomy, rainy, and cool. What we did get was very rainy, lighting, and thunder.

While getting off the train, it opened up on us. Yes, it just kept on coming, and not a shelter in sight except for the volunteers, and food areas. With standing water, mud, and a bit of a wind we just had to come to terms that we were going to be uncomfortable sooner than later.

Everyone involved had a great attitude towards the situation fully knowing that being uncomfortable was par for the course so we all took it in stride. Heck, once the colors were presented, our national anthem sung, and a speech given it was time to ruck and roll. A 20 mile ruck with weights of your choosing is what makes this event all encompassing. We’ve had children, and adults with their school bags and gym shoes , and the elderly with nothing on their backs. You get this done the best possible way you can in the time you can.

Our team of five had a two females, and three males. Each wearing a ruck or backpack that suited their ability to accomplish the goal of 20miles. We had no illusions of trying to keep up with the ROTC HS / College kids. Nope, my ego was checked when I registered. With that being said we did pass many people on the route who were much younger than us and finished much sooner also. 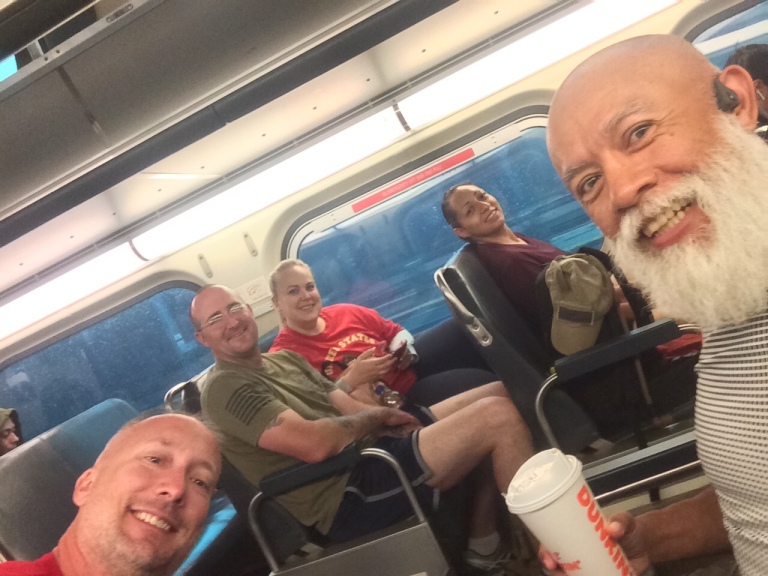 Typically due to improper footwear I’d lost nails the last two years, and no I’m not posting pics of them although I did take pics of my feet. This year I wore the shoes I’ve been training in for over six months I’ve broken them in, so they’re so comfy and wide. I’ve worn many brands of shoes for training, and have found them to be very solid, zero drop, wide toed, and look odd. I dig them. They’re the Altra Superiors 3.0, but the link will give you the 4.0’s. I’m gonna grab them next for my trail half marathon in October.

Selene, she wore the Altra Lone Peak 3.5. Solid shoes, and man do they make a difference. Not having any foot issues is a big deal in such an event as this, and we’re two happy people because of it. They did not break down with 50lb on my back, and that’s not including water, food, or extra gear.

We rucked through beautiful neighborhoods, and walking past the Baha’i House of Worship It’s a beautiful building outside, but you’re gonna drop your jaw when you go inside.

Our lunch stop area (designated) in Evanston, IL we had a chance to do foot care. Change socks, check for blisters and such items to be taken care of. Someone decided to get a little warmer by using a garbage bag to get warm. 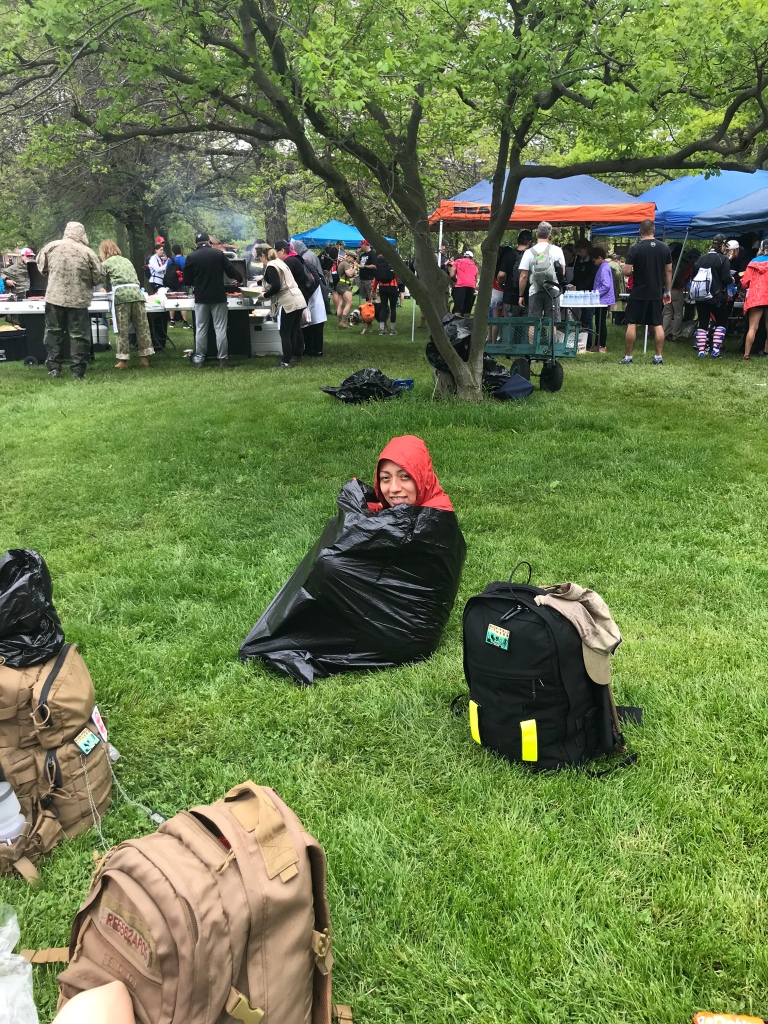 Well fed by our volunteers, we donned our gear and headed out. Warm? Not really, still a lake breeze keeping the temperature at 55F/13C all the time. The wind at times was nasty, until we were on Sheridan Rd, by Rogers Park until way past Loyola University. Once we got to Hollywood beach, game on for windy, cooler, and a little sunny. By that I mean that it was brighter and no rain. Rucking on the lakefront path is always a treat except when the idiot bike riders think their higher level of riding a bike fast is greater importance than the pedestrians they barely miss hitting. Dickweeds!

Once we passed the uptown area, past Montrose harbor, and cricket hill the Rucker’s were very spread out, and you could tell everyone was determined to make it. No matter what. Blisters, and body aches be damned! Supporting each other whether or not we knew each other is of more importance than being a lone wolf in this event. Words of affirmation is one thing, but get words of encouragement from strangers really lights their, and my fire. That’s why I keep coming back, to give back.

Once passed the Nearing The totem pole we were stopped and greeted by a bud of of Weber’s whom he had served with and started to give us beer. Heck, I was thrilled and thirsty so I of course enjoyed a can, and carried another just in case I felt thirsty sooner than later. Actually I felt good after that, I had just taken my CrankSport eGel. So, my carb load went up and I felt goooood!

Once we made it to our last obstacle, which happened to be a bridge to cross over Lake Shore Drive at North Avenue Beach, we were feeling it for sure! My legs ached pretty bad, but we were determined to either hobble or crawl to the finish!

Selene took a video of struggle but we were laughing at our level of discomfort. Old geezers doing work! 😂

One the funniest things that happened was when we were resting waiting for others to finish and hydrating with my beer of course I started to get cold. So I said I’m going to put on another shirt to warm up. While trying to put in over my head I couldn’t lift my arms and got stuck. As if on cue Weber, and Selene began to laugh hard at my demise but wouldn’t help. My inability to don a shirt was due to the crush line injury on my traps by the ruck. So, that’s my excuse and I’m sticking to it.

They laughed so hard they couldn’t reach their cameras to take a pic. Good thing.

As far as equipment this year as last events went here is the load out.

My faithful ruck from GoRuck in the GR1 has been such a sturdy piece of well made equipment that has been dragged, thrown, swung, smashed, soaked, and in all weather conditions to boot. It’s tough I tell you. Very much so, that hauling this ruck for prolonged period of time (7+ hours) it does not lose its shape. Shoulder pads are very well padded, and my suck factor was well reduced as I lugged 50lb for 20 miles that day.

It may sound like a product review, but not my intent. It’s a statement of fact to instill in anyone starting out in any endeavor such as this to go out and try out many rucks, and read plenty of reviews. One purchase, no regrets, and plenty of time had working out with or using it as a EDC bag.

I hope to have more participants next year to join us, maybe it’s you?

This site uses Akismet to reduce spam. Learn how your comment data is processed.